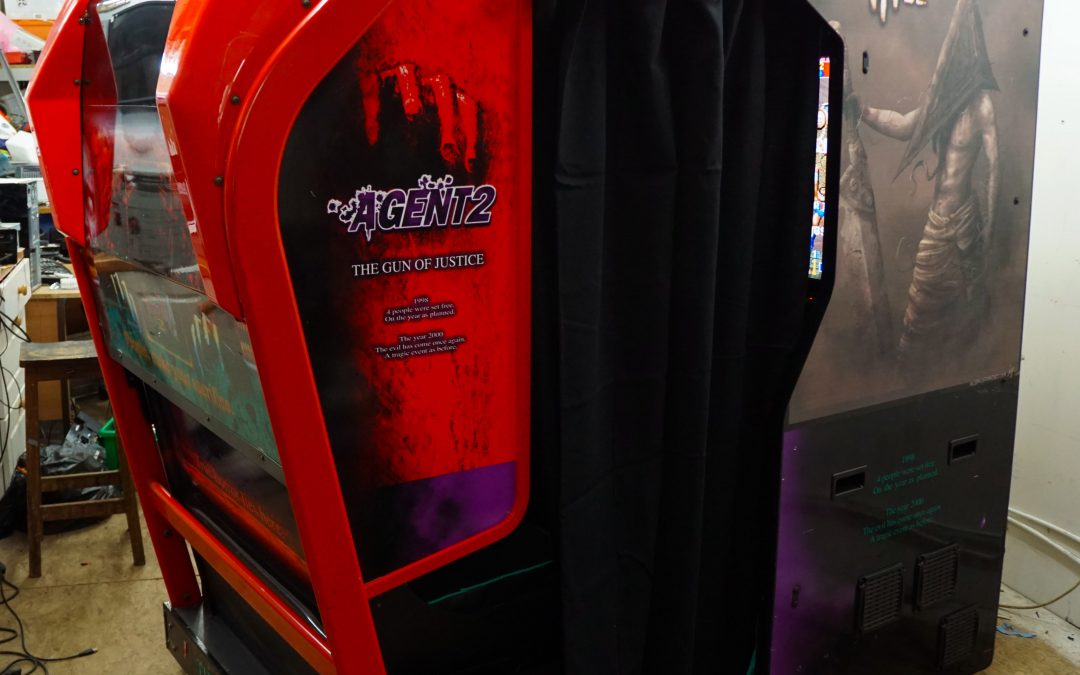 We are very pleased to present to you our best arcade machine built to date. It’s a sit-in House of the Dead arcade cabinet that we picked up as a shell and converted it into the ultimate arcade and gaming experience.
We’ve rebuilt this arcade system with excellence and user experience in mind and now its finished, we’re glad we did, the cabinet is truly awesome. Please check out the photos, video and blog.

This gaming machine really does put a smile on your face, its more fun than anyone’s got time for. You feel totally immersed in your own gaming as you’re ears, Brain and eyes are bombarded with gaming goodness from the 1980’s and 90’s.

Sit down in this customized Cab with room for two people and choose between Shooting zombies or playing 1 of over 1300 arcade games.

If this gets dull, plug in your own gaming console and make the most of the excellent sound and games setup.
Easily add your own game ROMs via the USB port mounted on the front of the console.
Play Silent Hill single player in glorious 5.1 surround sound while feeling every gun shoot via the bass subs built into the seat unit. Our system really moves the seat and air in the cab making classic games exhilarating.
We’ve fitted a 50” LCD screen and rebuilt the console area to house the custom console panel, add storage and house the integrated AV/PC equipment.
The system is very easy to use and be easily expanded by adding a games console, PC upgrade and accessories.

The system has a removable windows 7 gaming pc installed, setup to run classic arcade and PC games. It comes installed with Silent Hill, House of the Dead 2 and 3. We’ll be installing a few more as the games we have installed play great. The Aimtrak gun is accurate and responsive.

You feel every gun shoot and blast though the seat as it vibrates and pulses with sound waves.Combine this with the inbuilt 5.1 surround sound powered by the Onkyo RC-735M amplifier makes your bones shake and gives you a gaming experience that’s second to none.

There are also two buttons on the console that exit the game and add credits. This PC will work online, so we’re include a Zboard MERC Gaming keyboard and Dell mouse for playing First Person Shooters. Although not installed, I’d advise getting a Steam account for downloading old games to play.

We’ve installed a 2 player, 6 button setup with new LED lit buttons and original refurbished arcade joysticks. The Control Panel has been finished with a custom print that designed around the button layout and has a  circuit Sci-fi aesthetic.

This is all used via the Pandora’s box. The Aimtrak light gun system is connected to the PC and lets you play arcade light gun games in the comfort of your own immersive gaming center.

Ass melting bass, with full 5.1 surround sound. A bass speaker beneath the seats provide an exhilarating experience. Feel every gunshot, each shockwave from grenades while you mow down zombies or throw a hadokin.

The system mostly uses the original speaker setup and we’ve added the Bass pulse units and the front center speakers. It’s very loud and totally controllable via the remote or by accessing the amp behind the glass door.

The Pandora’s box is the powerhouse of this arcade system. Its a hardware based games emulator that’s easier and more fluid to use then a standard mame PC system. It requires no mouse or keyboard to use and is customisable. It comes with 1300 arcade classics, ranging from the early 80’s space invaders to the early 90’s Street Fighter ex2.

Link to full games list. The games are sorted alphabetically or by genre into Fighting, Shooting, Sports, platform and puzzle. You can add your own favorite to a list for easy access and unlike any other hardware emulator you can add your own game roms via the front mounted USB port on the console.

The system is powered on and off by flipping open the power switch on the console and pressing the red button. Doing this also powers on the lights for the arcade buttons. We thought is best to install a power button as you don’t want the light from the buttons distracting you while your playing on a light gun game.

The screen is a 50” Samsung LCD TV screen. Its connected to a Cramer video spitter (with remote) making it simple to switch between your different video sources when you move between PC, Pandora and Games console. The audio also changes channel with the video, so no messing around with leads or plugs.

The fun doesn’t end there. I’ve installed 2 mains power plugs, 2 USB ports and a spare HDMI port inside the cab, so you can plug in your favourite console and extend your gaming experience.

For example playing Red Dead Redemption in this cab is brilliant, really immersive and very hard to stop playing.

When we got this cab half of its original house of the dead artwork was destroyed, so we saved what we could and removed the worst of it. When we rebuilt the cab I wanted to highlight a couple of the games that come with the cab, so I’ve chosen Mortal Kombat 2 and Silent Hill.

Both pieces of art are compiled, printed, laminated and applied in house to a high standard. As the machine comes with 2 house of the Dead games it seem appropriate to leave the remaining artwork in tact.

The inside the console area has been completely rebuilt to house the Audio/visual equipment  needed to power this arcade machine.

The console is metal and has been converted to a arcade control panel. To help with comfort we’ve had black seat cushions with green piping made to fit the cab and a new set of blackout curtains keep the boring outside world away.

The ceiling has a LED light system fitted. It changes colour to sound or can be set on one of many mode as static colour or cycling using the included remote.

You can find out more about which cookies we are using or switch them off in settings.