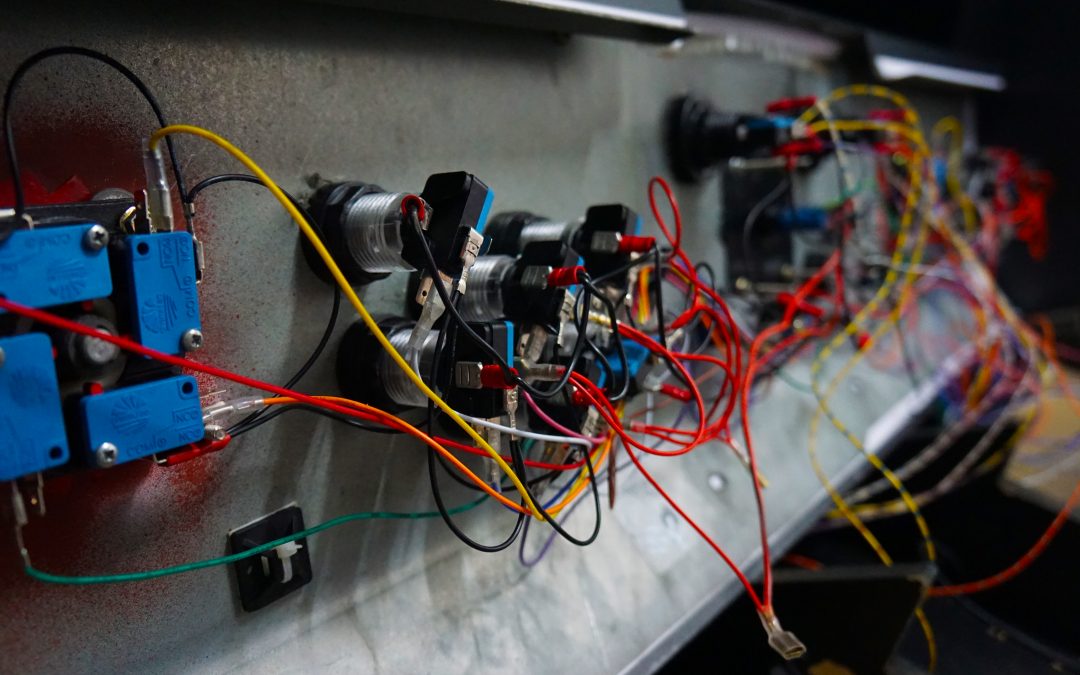 Some years ago Stuart brought a none working 2 Player House of the Dead 2, Siting, light gun arcade machine. It had pretty much reached the end of its life as a working unit. The rear projection screen was missing, the guns and PCB were done for. The cabinet was filthy and most of the artwork was destroyed, but despite all this Stuart could see a glimmer of inspiration in the husk and decided to keep it at the back of the workshop until the time was right and an idea had been formed.

3 years later, I joined Stuart at Retro Leisure and after 6 months at The University of Stu and much tidying up of the workshop, Stu thought it was a good time bring out the cab and introduce me to something I’ve never seen before. After moving arcade machines around the warehouse for an hour and a half, like a giant game of Tetris, moving one machine a couple of meters before slotting it into the space where another had been, we reached the the back of the warehouse.  It looked like a big red shitted up photo-booth, it had collected a thick protective layer of dust and other stuff all over it. May first thought was “that looks heavy”.

We dragged it out into the light, removed all the rubbish from inside, cleaned it up a little and lelt it sitting there for a week, while we both had a good think about what we should do with it.

Well, after about month of brain storming, discussion, arguments and shouting, interspersed with lots of tea and rethinking we came up with a plan we both agreed on… sortof.
What we decided to do was to convert the old House of the Dead 2, Siting, light gun arcade machine into the uber funk of all arcade, multi game, PC, light gun, console and media experience. kind of an immersive games room that could house all your favorite games regardless of their platform or architecture.
We wanted this machine to be the kind of experience that you’d be willing to knock down walls in your house to get it inside. One that would be simple to use, but be so much fun that your mates would genuinely be in ore.
One of longest discussions, cough, me and Stu had was about the decoration and artwork for the cab. This ranged from reproducing the original artwork to a full Baroque gold leaf interior with a stocked fridge,automatic retracting keyboard and rear Cadillac car seat. In the end we went for a black interior, tailored black and red cushions for the seat and something cool for the controls console.
For the exterior we decided to keep some of the better artwork and remove the rest. The new blank space could be decided by the future buyer, we’d offer a customisation package included for free, one matched to their tastes.

So what will it do?

When building this machine we’re going to incorporate the following features:-

That’s about it for now but this list might get longer.
Screen
Originally this arcade machine would of had a rear projection screen but when it came to us it had a big hole where the screen should be, so we filled it with a 50″ LED 1080p Screen.

Side art will need a touch up.

Console
This machine doesn’t have a console, it does have a long slab of steel…

and here’s what we did with it.


First Design an overlay for the console.

Next measure and cut all holes.

Print a draft overlay to make sure everything fits.

Time to fit the buttons, joysticks and tracker ball.

Wiring loom up next.

I think you get the idea.
How we got a nice console we need somewhere to put it. This is our starting point

And now for the amp cupboard, storage and PC housing.

Lets have a look at the seating section of the machine.

Time has passed, idea’s have changed, tea was drank and this is the final push to completion.
So we got the PC working and the console together then we had a break from the project. When we came back, it was decided to install the new Pandoras Box 6s as the gaming emulator. This little box comes with 1600 games and the capability to add your own roms, hide games you don’t want to play and has a good search function for finding your favourites. It also stores a favourite list. The hardware’s reliable, needs no maintenance or keyboard/mouse and is easy to operate. Its a real jump forward on the last model.
So to do this we had to rip out the console and ipac loom and rewire it with a jamma loom.

I ended up striping the console and printing a updated design.

Console wiring done, Testing the 5v LED’s. BTW theses only turn on when you turn the Pandora on, so aren’t annoying when your shooting zombies and you want it dark.

Loom in and console mounted securely. The Console is fully working, looks and feels great.

Everything’s been cleaned and spruced up and the last of the wiring for the rear portion of the cab gone in. The colour changing led ceiling lights are on, 5.1 surround sounds loud and present and the bench pulses with bass.

The sideart selected is printed, laminated, fitted and trimmed in-house.

There are at least 3 Mortal Kombat games on this system, so it seemed fitting to use it here.

Silent Hill is a awesome arcade game. Good news its runs on the gaming PC and you can play it and a few other games with the supplied light gun.

Silent Hill also makes full use of the powerful 5.1 surround sound system. It will get you heart pumping.

All this machine needs a few final details addressing, then it will be finished.

And This is the finished Immersive Sit-in Arcade and Gaming Center.
This is the end of this blog but I’ll be doing another on this cab but as a complete product. Thanks for reading 🙂

Find out more or adjust your settings.